Here are some items I got done in the last year 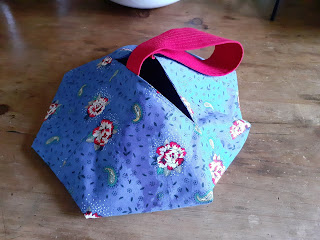 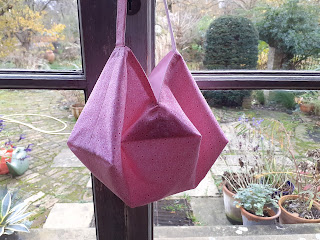 They are both the same octagonal bag. I made another two, I must check where I put their photos. 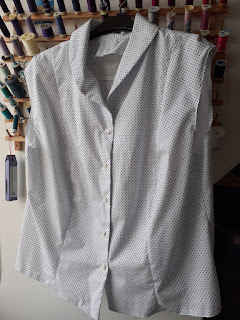 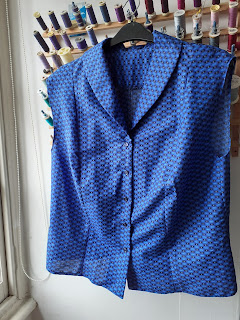 A skirt I shortened from a dress WIP that didn't work out: 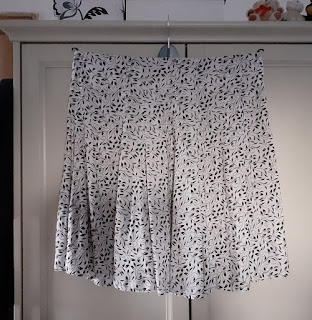 There are more, I just need to take proper photographs. But I have been busy sewing.
Posted by Gisella at 20:19 4 comments:

Before and after... the moths got into my new shawl

Thankfully these before and after pictures tell a nice story. I fixed those holes made by the little blighters. Amazing what a bit more time at home can do.

This is before with all the damaged areas marked by a pink thread: 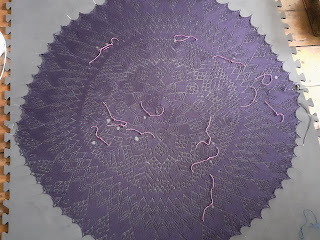 And this is after I fixed them: 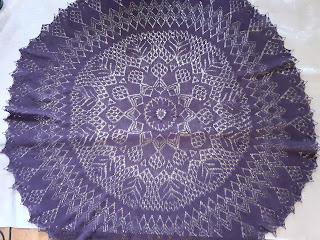 I'm very glad I was able to get to it so quickly. Within one week.

I only discovered the damage those blasted moths did when I came to block the shawl in the last week.

I thought that the pattern for this was called Vintage.. something. Turns out its name is actually Semco Fairy Knitting Design Number 9, very fetching! Here's the link to the Ravelry page. I seem to remember that the instructions were written out, row by row. I don't usually like those patterns because I find it cumbersome to have to read out what it says. I usually draw in pencil lines to set off the different elements from each other and make it easier to find my place again.

I prefer a good chart. You can see what stitches build on stitches in rows below and you can often tell what the motifs are going to look like. I find them easy to read because I have a very visual approach to things in general.

This has quite a large number of rows so when I started this I decided that it was going to be the project that would keep me entertained for the however many years it would take to get through it if I only picked it up every so often. I had a look: I started this in 2010, so it's been almost ten years.

The actual knit itself did not take years, but I only picked it up here and there. I should have known that the knitting part of this would go relatively fast: I know what I'm like with lace knitting. I get absorbed! I get obsessed with trying to find out what the next row is like. That's what I love about lace knitting: pretty much every row is different from the one below. There's always something a bit different to keep it interesting. It took me a number of months to knit it, but the edge loops took a long time too. I had to rest it often and for a long time in between. My Ravelry notes say that I did the first version of the edge treatment in 2014 and then those loathed crochet loops in 2016. I really drew this one out...

I do like wearing these over-sized doilies as shawls. I fold them in half and sling it over my shoulders. Very nice'n'cosy for the back of my neck that gets painful if cold or in a draft. My shawls are a well-being necessity for me.

This yarn is very gorgeous: soft, scrumptious, with that sort of plumb, satisfying feel to it. The moths must have thought so too.  I can't believe they got into the zipped freezer bag that I stored this in as a WIP. I found a small hole where they could have chewed their way out. Who knows how they got in. It was very upsetting when I discovered the damage. I was even considering ripping this down and starting over.

The one thing that stopped from doing that was the hundreds of crochet chain loops that form the edge. I nearly lost the will to live over them. I really hate doing them. They take so very long and are so annoying to do. Again and again the crochet hook will slip out of the loop and I have to carefully spear the thing in the right place to avoid twisting or splitting the yarn. That just invites breaks and is a big no-no.

Still I got there. First hundreds of crochet chains, and then a multitude of moth holes all fixed. I think I did a pretty good job on the fixes. I didn't pull the thread tight enough in a few places so you can still see bigger holes, but I'm not losing sleep over that. Some of the fixes are almost invisible, other places I can still find. Oh well. Mustn't have presumptions of perfection.

This is one area that doesn't look too bad. Just a bit of unevenness left: 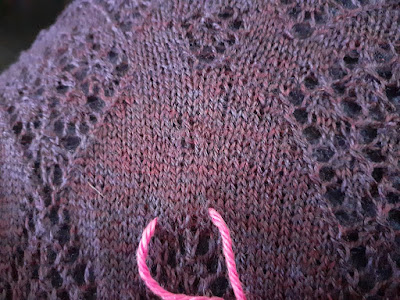 PS: The actual colour is a bit more aubergine rather than this violet. Shame that cameras don't always render the colour as the right shade.

I'll make sure to double bag the shawl and I've shaken it very well!

Looks like I never posted about my pretty grey shawl: 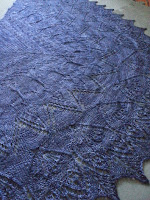 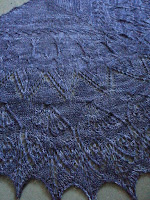 This is from the Follow My Arrow 2 pattern by Ysolda Teague.  It offers two patterns for each of five sections of this shawl. So there are 25 different ways of knitting this.

I really enjoyed it!

I loved the edging a lot - this is what attracted my attention to this pattern in the first place. That one was a must. I think that the other four sections go realy well with the edging, it was almost like they picked themselves and I just had to listen to what they were telling me: pick me, pick me! 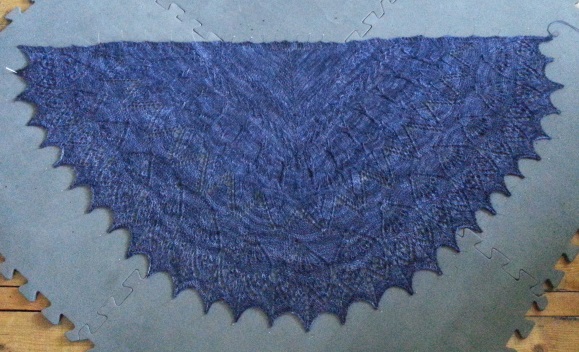 Gisella
I like all kinds of different things: jack of all trades and master of none - that's me. I tend to get a bit obsessed with my current interest. Like crafts, or writing, talking or reading... I also find a whole host of things rather absorbing: history, architecture, writing, photography, web design, etc etc